Chicago Bears are playing in the Superbowl on Sunday. So let's all sing along:

I have been trying to finish an essay for the first time in about 3 years - on the writings of 9th century man of letters from Basra, Abu 'Uthman 'Amr b. Bahr al-Jahiz. He's great. Here is him on books, not long after the introduction of paper to the Muslim world from China:

"A book is a receptacle filled with knowledge, a container crammed with good sense, a vessel full of jesting and earnestness. If can if you wish be more eloquent that Sahban b. Wa'il, or less talkative than Baqil: it will amuse you with anecdotes, inform you on all manner of astonishing marvels, entertain you with jokes or move you with homiles, just as you please. you are free to find in it an entertaining adviser, an encouraging critic, a villainous ascetic, a silent talker, or hot coldness...

"Moreover have you ever seen a garden that will go into a man's sleeve, an orchard you can take on your lap, a speaker who can speak of the dead and yet be interpreter of the living? Where else will you find a companion who sleeps only when you are alseep, and speaks only when you wish him to... You denigrate books, whereas to my mind there is no pleasanter neighbour, no more fair minded friend, no more amenable companion, no more dutiful teacher, no comrade more perfect and less prone to error, less annoying or importunate, of a sweeter disposition, less inclined to contradiction or accusation, less disposed to slander or backbiting, more marvellous, cleverer, less demanding or quarrelsome, less prone to argument or more opposed to strife, than a book."

I have been singing the star-spangled banner to myself all week. It’s a beautiful tune. Far better than our rather dirge-like effort (the title of which tune, as all you trivia buffs surely know, is reputedly ‘America’). Here is a site with some old versions, if you want to hear it again: http://www.star-spangled-banner.info/...
and so let us all join together and sing...

Oh, say, can you see...
by the dawn's early light... what so proudly we hail'd...
at the twilight's last gleaming?

Actually the words are pretty crap, so we’ll leave it there. I always thought it said “Oh seek and ye’ll find...” something. Another lyrical dissappointment. I often find that song lyrics that I imagine to be correct are more satisfying that the real ones. A case in point is the syntactical elegance and concision of my mistaken hearing of the chorus in Aretha Franklin's Natural Woman:

Which I still find more plausible than the ostensibly accurate lyrics

"Call me when you try to wake her up."

He just doesn't sing enough syllables to make it possible.

Anyway, the starspangled song was in my head as I went to the cast party for a production of Henry IV part 1 that we have been working on and which had its final night last Saturday. And as luck would have it, I had an opportunity to wheel the song out. In fact I had gently suggested that the cast sing it for me at a rehearsal a few days previously, but had only got Evan, our composer, to play it on the ‘cello. Back to the cast party... and I am getting myself a beer from the fridge. I stop in the hallway to talk to Ezster, my Hungarian actor friend who is another spouse/spousal equivalent of a graduate student, and who taught the cast a thing or two about stagecraft. And what do I hear piping up from the next room, but about 16 ragged voices lifting in song – the national anthem – but not their national anthem. No, they were raucously enjoining God to save a Queen on whose house their forebears (or 4 bears?) had turned their backs some 3 centuries back. I guess its because they had been acting an English play, and running around in hose invoking concepts of majesty, honour, nobility and the like.

But, now, what do I do, but rush in there as the strains of our national song are croaking to a halt, and pipe up with their very own (misinterpreted) tune? And what do they do, but take it up equally enthusiastically and raucously? It was truly very stirring.

In fact people I have met here tend to be a bit sheepish about American patriotism (mind you, I have not knowingly met anyone who voted for Bush, either – darn liberal inteelectuals). But late at night with a good play behind you and a few beers inside you, it clearly makes all the difference. Ezster was amazed. How come they knew all the words. I overheard Tian-Tian (she’s from Kansas) explaining that every sporting event they ever go to incorporates a national sing-song. Yes, but have you ever watched the mouths of the England football team as the camera pans across them before a game? About 1 in 10 (or 11?) of them is singing – they don’t know the words damn it! They don’t care. British patriotism is less about flags and tunes, and more about thinking foreigners are a bit weird and should really be more like us.

I have been trying to publish these photos, off and on for about a month. It's all stuff from the Museum of Mexican Fine Arts. Not every piece there is great art but it is very lively and varied. The range of media worked in is almost endless. See Flora in front of a piece made entirely from...? 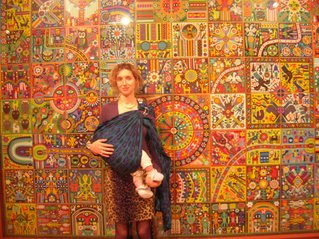 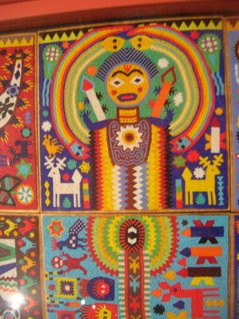 ... made entirely from beads.


Around Pilsen you see lots of other signs of the Festival of the Dead - decorations which resemble Halloween, but focused on flowers, skeletons and other dead people, rather than monsters or anything. One bakery had a couple of life-size bun corpses: 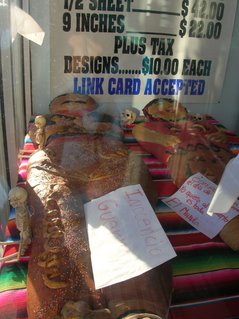 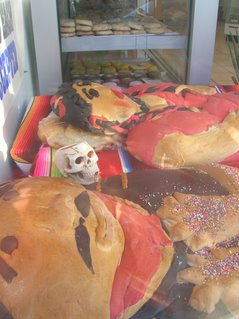 Reminds me of a comic strip in Viz. What's his name, anyone?

If all the seas were ink...

God said “If all the trees in the world were pens, and the sea supplied [ink], with seven further seas after it, the words of God would not be exhausted”


Did this Quranic verse inspire the following anonymous doggerel?

"If all the world were paper and all the seas were ink, if all the trees were bread and cheese, what would we have to drink?"

Jacob is asleep on my knee, pinning me down before the computer, so I will take the opportunity to give y'all a li'l update of our lives in these here parts. (OK enough of that.)

Sometimes it hits you hard that you are in America. I had almost forgotten that Halloween was coming up. I can't remember when I last went to a H party - but oh yes.. now I think it we did do a bit of pumpkin carving with rest of the dissolute expatriates in Kabul.

But I've never seen it like this. Last night the streets were teeming with teenies in superman costumes and monster outfits, with men in drag and girls dressed as imps. On Friday we went along to a concert given by the UC symphony orchestra where everyone but us and a few other audience members was in costume. The horns were dressed as daisies and the double basses were gangsters and a torreodor. The conductor was some kind of crazy witch and the leader was a plump chap in a tight red dress and suspenders. It was nice to see more than the usual half-hearted efforts. Plus the choir came down the aisles and sung at us from either side, and school children specially drafted in came and danced their ballet along to the pieces - Bizen, Saint-Saens, Barber etc.

Then there is the Mexican thing. Now I am told that this is not connected to Halloween. A couple of weeks ago we went along to Pilsen - the former Czech, now Mexican 'hood (neighbourhood) - and went to the Mexican Fine Arts Center (centre) where they have an exhibition for the Festival of the Dead which is some kind of mixture of Christian and Aztec customs. It's full of crazy stuff that place. They have a whole room dedicated to shrines of people from the Chicago Mexican community with their portraits and candles and significant artifacts from their lives - among them a respected Spanish-language broadcaster, a young man killed in a road accident, and an old lady who had been full of life and wisdom (she used to say you spend half of your life squeezing into uncomfortable shoes and the other trying to find the perfectly comfortable pair to make up for it).

Then they have a whole bunch of paintings, collages, etchings, sculptures (made from, wood, straw, metal, feathers, wicker, plastic and a host of other materials) depicting death-life, regenerations, jolly skeletons, such as... 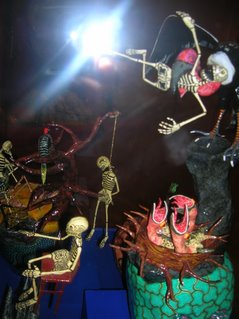 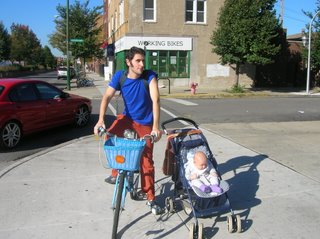 Here is me and my boy, posing with a newly purchased bike a couple of weeks ago. Moving to a new place is constantly confusing - whether its Kabul or Chicago seems to make little difference - there are all these little things to get a hang of - how to get the phone to work, and where to find a postoffice and all that. It's a great relief to be able to zip quickly from place to place on the bike now.

We got the bike from a collective which exports good bikes to poor places and sells poor bikes to Chicagoans to fund it. This ol' baby set us back $50. (The bike)

It's getting a bit chilly now for fun cycling, and the wind tends to alter its direction in order to give me extra exercise. But it means that Flora can get between her son and the library in quick time and I can jaunt off to my Henry IV rehearsals.